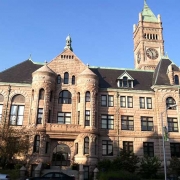 Lowell, Massachusetts is an old school industrial town on the banks of the Merrimack River. The City Hall is an impressive soaring building – a chiseled stone commitment to civic responsibility and engagement. Laced with well-planned canals which powered the mills and factories, Lowell wouldn’t exist without the Merrimack.

In 2017, a teenage passenger was killed in a collision on the Merrimack up river from Lowell. The personal watercraft she was riding on was struck by another watercraft operated by a 32-year old man, who was drunk, operating an unregistered watercraft in the dark, 10:30 at night.

This followed the death of a man operating his personal watercraft over the July 4th weekend that summer. This victim, known for his boating safety practices, was struck in broad daylight by another boat with literally hundreds of boaters nearby. He was abandoned by those who hit him as they fled the scene. To this day no witness has ever come forward and no one has been charged in his death. Both of these crimes are the worst of the worst when it comes to boating.

Massachusetts has well established boating laws to address these crimes. Rather than enforcing the existing boating laws within their jurisdiction the Lowell City Council decided the only answer was to ban personal watercraft entirely from their section of the Merrimack.

Contacted by our members and dealers in the area, the American Watercraft Association (AWA) spread the word to the local PWC community. Our staff attended the public hearing pointing out the extreme public policy of banning the recreation of thousands for the criminal acts of two individuals. We urged the council to actively enforce the existing law. Local residents and dealers all said the same: Enforce the law.

But that was hard for the City Council. It was easier to just ban it.

Never mind that the city already has, by name, legislative authority to deal with this activity. Rather than address this issue with the individual or use its already granted authority to solve the problem, the city demanded the state legislature pass a new state law to deal with one… single… individual.

Again, enforcing the laws on the books was too hard for the city council. It was easier to have the state ban it.

Both of these recent restrictions highlight what happens when local government becomes lackadaisical in enforcement and takes the easy way out by blaming illegal acts on legal personal watercraft owners. Such policies are about as far away from ‘justice for all’ as can be. As taxpayers, riders, and business owners, we must not allow lazy efforts by local governments to impact our choice of outdoor recreation. We should never be burdened by the absence of sound public policy by our local elected officials.

A jurisdiction that refuses (and that is exactly what these two local governments did) to enforce laws already on books, and instead works for new laws to impact the citizens they serve is dysfunctional. We each have a responsibility to hold our local government to account. Over my years working this issue, the one proven action that gets results is direct public involvement.

Everyone of us should know our city or county governing bodies well. We should personally know our representatives on those bodies. Nothing impacts proposed policy more that direct face to face contact with your governmental food chain. Local government can be tedious and mind numbing in it’s minutiae, but your involvement and knowledge of what they’re up to is essential.

Dealerships have the potential to be a political force to be reckoned with. Keeping your customers informed and urging their involvement can pay dividends in astonishing ways.

When a dealership is involved and motivates their customer base to oppose or support policy, they win. We’ve witnessed it many times.

Dealers are not alone. The American Watercraft Association’s job is to assist and protect individual and dealer members from burdensome local, state, and federal meddling in the free and equal access to our public waterways. As local government becomes more insular and rigid, only direct local involvement can break through the preconceived attitudes concerning recreational access.